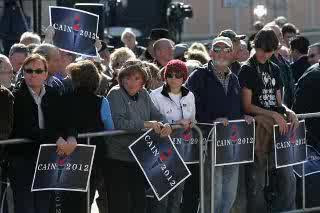 REPORT: Herman Cain, the insurgent populist whose candidacy has been ensnared by allegations of sexual impropriety, said Saturday that he is leaving the race for the Republican presidential nomination, saying that the allegations have cast a "cloud of doubt over me and this campaign."
"As of today, with a lot of prayer and soul searching, I am suspending my presidential campaign," he said at an event in Atlanta. "I am suspending my presidential campaign because of the continued distraction, the continued hurt . . . on me, on my family, not because we are not fighters, not because I am not a fighter."
READ REST OF STORY HERE:
http://mobile.latimes.com/p.p?a=vpi&postId=1277258&m=b&mfId=1115806&sessionToken=&postUserId=7

Visit msnbc.com for breaking news, world news, and news about the economy
at 10:59 AM