IT WAS LIKE THE TITANIC: Costa Concordia: Three Dead And About 40 Missing After Cruise Ship Runs Aground Off Italy - Sky News 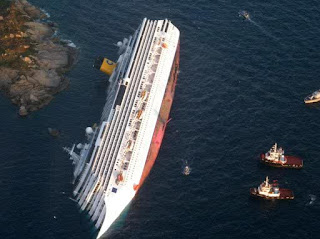 REPORT: The captain and first officer of a cruise liner that ran aground off the coast of Italy are being held on suspicion of multiple manslaughter and abandoning ship while passengers were still in danger.

Three people are known to have died and around 40 others are still unaccounted for after the ship, which was carrying thousands of passengers, including British holidaymakers, apparently struck a rock.

A man and a woman were reportedly later found alive in a cabin on the stricken vessel by firefighters.

Survivors of the disaster have described chaotic scenes "like something out of the Titanic" as the Costa Concordia tilted and started to sink.

Pictures showed a massive gash in the hull more than 150ft (45m) long. There was a huge rock embedded in the side and the liner was on its side.

Email ThisBlogThis!Share to TwitterShare to FacebookShare to Pinterest
Labels: concordia