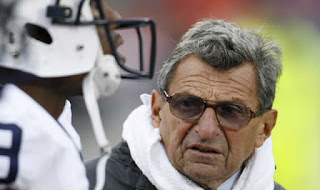 REPORT: America's most famous football coach, fired from his job last November after 46 years during a sex abuse scandal, has died.

Joe Paterno's death on Sunday followed a battle with lung cancer, his family said in a statement.
"He died as he lived," the Paterno family said.

"He fought hard until the end, stayed positive, thought only of others and constantly reminded everyone of how blessed his life had been."
Mr Paterno, 85, was forced to quit his job in November as head coach of the popular university team after details emerged of a child sex abuse scandal involving an assistant.