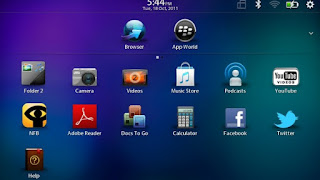 I'll add fuel to the fire N4BB.com started a few days ago. There have been many rumblings since N4BB.com exclusively reported PlayBook OS 2.0 would launched February 21st not the 17th (tomorrow) as many of us would have hoped according to other rumors. Still, we never got a release date from RIM so assuming the 17th was just speculation (and desperation).

To backup N4BB's report, BerryReview is reporting that the 21st is indeed confirmed by RIM through a webcast from earlier today.

Will it release as promised and the 21st? RIM learned to be tight-lipped on release dates since they keep missing the target dates. As February is quickly drawing to a close, the OS update should be releasing soon. I believe that if the update will be releasing 21st (or even Monday the 20th), RIM would make the announcement by Monday.