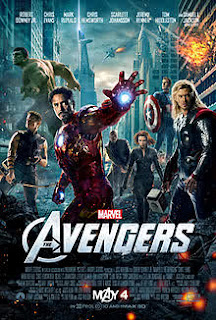 Once again all the hollywood gurus and even I underestimated the box office potential of Iron Man. In 2008, none of us knew how the wild card Iron Man would perform. When it became a solid hit, we were all shocked and glad it was. This time with The Avengers, we knew the movie would be big but this HUGE? I forecasted $140m. Hollywood estimated $170m.
Real life? Try $200m+ in 3 DAYS! The movie didn't break any records Friday. By Friday evening my tracking of $140m was looking solid, but then the movie-goers in the West Coast took to the night showtimes. By Saturday morning, the returns ballooned overnight. Saturdays returns also ballooned overnight. When the wheels of the ticket sales trackers came off, that's when all of us realized the Monster became loose and sky's the limit for The Avengers!
Deadline.com is reporting that at more than half the tickets sold over the weekend were for 3D showtimes. Those are premium sales tickets. That's great for the 3D industry after dismal performances by other movies. Opening in 3D also gives The Avengers the advantage to hold the weekend opening record for some time. The Dark Knight Rises, as much as I expected that one to hit the $200m weekend might not beat The Avengers in dollar figures for the weekend, but it will in attendance. Why? The Dark Knight Rises isn't in 3D so no premium ticket prices outside of the IMAX will help Batman topple the team of seemingly misfits.
Now, figuring out The Avengers final gross will be difficult. Strong word of month will draw others to watch this film throughout the week and into next weekend. But if the movie doesn't record a 2nd weekend of at least $100m weekend, the movie will fall really fast heading into the rest of the month giving breathing room for the competition. Still, getting to $400m as a final gross should be a piece of cake - maybe even in 10 days from now! Crazy!
I'm so happy The Avengers out-performed everyone's expectations! Its a solid movie deserving of a sequel to be handled by the right people involved in making this one! Leave it to the hands of the fans and people that respect the characters to create something great from the source material.
at 10:35 AM