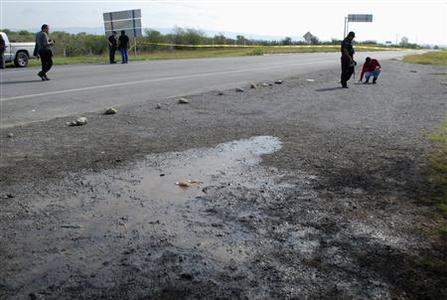 REPORT: Suspected drug gang killers dumped 49 headless bodies on a highway near Mexico's northern city of Monterrey in one of the country's worst atrocities in recent years.

The mutilated corpses of 43 men and 6 women, whose hands and feet had also been cut off, were found in a pile on a highway in the municipality of Cadereyta Jimenez in the early hours of Sunday, officials from the state of Nuevo Leon said.

"What's complicating the identification of all the people was that they were all headless," said Jorge Domene, the Nuevo Leon government's spokesman for public security, who said the other body parts were missing.

Domene said the brutal Zetas drug gang claimed responsibility for the murders in a message found at the scene.

The massacre was the latest in a string of mass slayings that have convulsed Mexico in recent months, many of them in the north of the country, where the Zetas have waged a war against rival groups for control of smuggling routes.