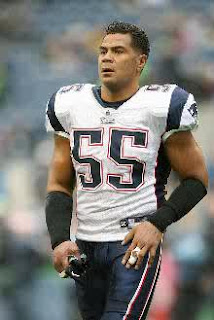 I tweeted this hours ago when the news broke. Here's an excerpt of the story.

REPORT: Behind the police tape, a white coroner's van sat in front of a garage on the 600 block of South The Strand. It waited to collect the body of Junior Seau, a linebacker among the most feared in N.F.L. history, father to three teenagers, son to the mother who wailed long and loud on Wednesday.

Earlier in the day, according to the Oceanside Police, Seau's girlfriend went to the gym. When she returned, she found Seau in a bedroom, a gunshot wound to the chest, a revolver found near his body but not a note. He was 43.

The police are investigating Seau's death as a suicide, Lieutenant Leonard Mata said, adding that they do not expect to finish the investigation until next week.

Seau was the second former N.F.L. player to commit suicide in the past two weeks. Ray Easterling, a safety for the Atlanta Falcons in the 1970s and a plaintiff in a high-profile lawsuit against the N.F.L. over its handling of concussion-related injuries, died on April 19 of a self-inflicted gunshot wound. In February 2011, the former Chicago Bears star Dave Duerson shot himself in the chest, saying in a note that he wanted his brain donated to the study of football head injuries.

As word of Seau's death spread through the city he long called home, the crowd swelled outside of the police tape, fans clad in Seau jerseys and San Diego Chargers caps, carrying flowers and lighted candles and homemade signs.