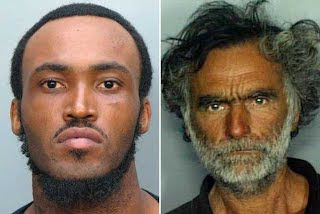 REPORT: First came Miami: the case of a naked man eating most of another man's face. Then Texas: a mother accused of killing her newborn, eating part of his brain and biting off three of his toes. Then Maryland, a college student telling police he killed a man, then ate his heart and part of his brain.

It was different in New Jersey, where a man stabbed himself 50 times and threw bits of his own intestines at police. They pepper-sprayed him, but he was not easily subdued.

He was, people started saying, acting like a zombie. And the whole discussion just kept growing, becoming a topic that the Internet couldn't seem to stop talking about.

The actual incidents are horrifying — and, if how people are talking about them is any indication, fascinating. In an America where zombie imagery is used to peddle everything from tools and weapons to garden gnomes, they all but beg the comparison.

Violence, we're used to. Cannibalism and people who should fall down but don't? That feels like something else entirely.

Email ThisBlogThis!Share to TwitterShare to FacebookShare to Pinterest
Labels: WWZ