This is what I said before. =)
MY ORIGINAL POST
-Andres 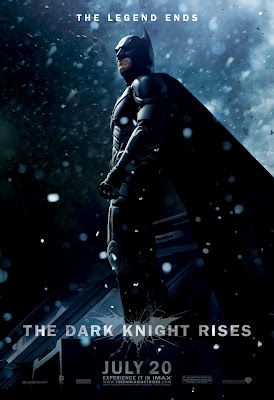 REPORT: Box office speculators are wondering whether the star-studded cast of "The Dark Knight Rises" stands a fighting chance against the super squad in "The Avengers."


With an opening weekend gross of $200.3 million, Marvel Studios' latest entry into the superhero genre busted the previous record-holder "Harry Potter and the Deathly Hallows, Pt. 2's" spellbinding opening haul of $169.2 million, but the third installment of director Christopher Nolan's Batman trilogy has an outside shot to reach similar numbers.


"I didn't even think $200 million was possible, and the Avengers had such mass appeal," says Paul Dergarabedian, box office analyst for hollywood.com, who added that he's shocked that the possibility even exists.


But with the colossal hype left over from the success of "The Dark Knight," which broke records in 2008 when it grossed $158.4 million its opening weekend, "The Dark Knight Rises" might just have what it takes to make the impossible possible.


A few obstacles do stand in the caped crusader's way, though. "The Avengers" had the benefit of being a 3D release, which allowed for higher ticket prices.


"3D was such a key figure for 'The Avengers,'" says Dergarabedian, "but if any film could do it it would be 'The Dark Knight Rises.'"


Another potential pitfall might be the lack of a draw like Heath Ledger, whose posthumous performance as the Joker in "The Dark Knight" came just a few months after his high-profile death.


But with the summer of 2012 already having been a boon season at the box-office, there is no reason to count "The Dark Knight Rises" out.

Email ThisBlogThis!Share to TwitterShare to FacebookShare to Pinterest
Labels: TDKR

I really hope that “The Dark Knight Rises” beats “The Avengers” record because it is far more deserving in my opinion after having seen “Avengers” and only reading the critics comments about “Rises.” Since “Rises” is longer though, it will take a mighty feat to beat Avengers, along with only 2D prices. In order to hold me over until “The Dark Knight Rises” comes out I started watching the five animated movies I found on Dish Online one day when my Dish co-worker was rummaging around there. I realized I can search for a movie there and order it for my DVR and watch on my TV. That way of searching is much easier and I’m getting primed for the new movie too.