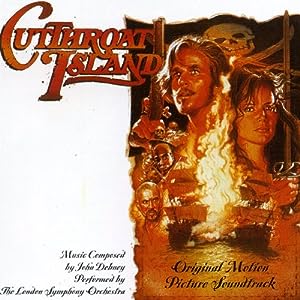 
One the best soundtracks in film score history!

...but widely ignored. Some have said that The Passion of the Christ established John Debney as a force to reckon with in the drama score category. What about action? The guy is only hired to do comedy and very few action films. CutThroat Island is an epic score, the only one I know John Debney has done. The film was a disaster at the box office. Had it been a success, maybe John Debney would have two oscar nominations counts instead of one.
In the single disc version, one gets about 71 minutes of music. From "Main Titles" to "end credits" John Debney keeps your ears happy and your room shaking - depending on your speakers' volume level.
The main title of the score is one that will stay in your mind for a long time. Its repeated in most of the tracks on the album and it never gets tiring. It starts off with low brass before the strings swell the music into a loud fanfare.
There are a few other themes in the album. Track 3: The Language of Romance introduces the beautiful love theme played by the flute. Another theme used three times in this album is a cue for a victorious moment. The militaristic cue is introduced at the end of track 6 and given steriods for the triumphant finale in track 18. The last track is basically a suite of the main themes of the album - as it should be. Overall, great soundtrack.
If 71 minutes isn't enough, not to worry. The COMPLETE SCORE was released on 2 CD late March [...]. This version contains over 2 hours of music!
The second CD contains Track 17 and 18 of the single disc version. I have never seen the movie so I didn't know how long the action sequence lasted. Tracks 17 and 18 of the single disc version are added to one very long track - over 17 minutes! - to make probably the greatest single action, epic piece ever written! Track 8 of CD 2: "The Battle/To Dawg's Ship/Morgan Battles Dawg/Dawg's Demise/The Triumph." You have to listen to this track to truly understand why I won't be able to shut up about it. The second disc also includes 5 bonus tracks, some of them are alternate versions of some of the original cues (e.g. without choir).
This is an incredible score and a must have for anyone that truly appreciates musical art. (Oscar, how did you ignore this one?) Buy it. Buy both versions. They will undoubtly be worth more in the future. You won't be disappointed! CutThroat Island is truly a masterpiece!

Link to my original review on Amazon.com