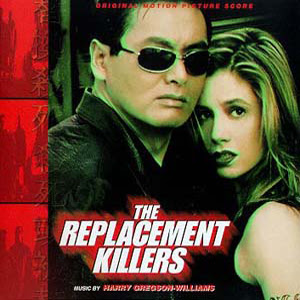 Harry Gregson-Williams (HGW) is among my top favorite composers.  He had a prolific year in 2005 with his epic Kingdom of Heaven and the not-so-epic but memorable Chronicles of Narnia, the Lion, the Witch, and the Wardrobe.  These scores really represent the extent of HGW’s talents mixing orchestra and choir.  Like every composer he had to start somewhere.  Like some collectors, I hunted down for old scores by HGW and ran into The Replacement Killers and got it for – pardon the pun – a killer bargain.

If it wasn’t for the pocket change I spent on this score, I would have gagged at the money I lost on this lifeless, atmospheric, theme-less score!  I’m sorry to be so harsh on HGW but this score is just noise.  There isn’t a hint of exciting scoring that Media Venture (now known as Remote Control Productions) fans can find in the album.  It’s just a bunch of droning noise with light synthesized percussion.  Wait, maybe it is what Media Ventures fan enjoy . . .

Throughout the album we hear HGW’s infamous “clong” effect that sounds like an amplified drop of water falling into a sink in a very acoustically balanced room (think Armageddon’s opening credits).  “John’s Theme” sounds like the main theme from Beyond Rangoon but with an Asian feel to it.  “Stalked” is supposed to be an action score but this “action” track sounds like it belongs in a video game.  The track is your typical Media Venture percussion and repetitive drum loops – boring and tasteless.  Wow, it’s amazing that this is the same drum loops still used today by Media Venture graduates.

I can’t go on about this score, and I use “score” loosely.  This is more of a collection of experimental tracks than anything else.  There’s more thematic development in Metal Gear Solid: Snake Eater so pass this one up and get the game score.  The only good I got from the score was experiencing how far HGW has come.  His voice is now evident in Hollywood and I look forward to his next great score!