SOUNDTRACK REVIEW: Sky Captain and the World of Tomrrow by Edward Shearmur 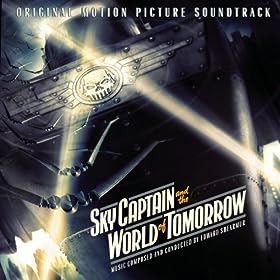 Sky Captain and the World of Tomorrow

2004 is considered a disappointing year for film music.  The strongest scores of that year were John Debney’s hauntingly, powerful score to The Passion of the Christ, James Newton Howard’s beautiful The Village, Hans Zimmer’s epic yet uninspired King Arthur, and John Williams’ better-than average Harry Potter and the Prisoner of Azkaban.  Gabriel Yared’s epic score to Troy was tossed out for being “too old fashioned.”  With the score’s tragic rejection, film music fans felt there wouldn’t be a reemergence of what made film music so classic.

Apart from the groundbreaking accomplishments of Sky Captain and the World of Tomorrow – that of employing blue screens and deceased actors – the crème de la crème is English composer Edward Shearmur’s epic symphonic score.  To many viewers’ surprise the film began with a main title fanfare!  Yes, low strings march over the opening logos in “The World of Tomorrow” as French horns play the prelude to Sky Captain’s trumpet fanfare reminiscent of John Williams’ Superman.  The theme runs the length of the opening logos then transitions over to the underscore of the zeppelin scene in “The Zeppelin Arrives.”

The robot army’s attack on New York City is made more intense and surreal by Shearmur’s score in “The Robot Army.”  The heavy percussion and orchestral clusters support the sound effects giving the monster robots a “heavier” feel and powerful presence.  Another excellent musical moment is “Calling Sky Captain.”  The slow, high pitched strings and soft, solo trumpet work as transition music as the camera floats through the clouds to reveal Sky Captain flying into view.  The Sky Captain trumpet motif makes a brief appearance then shifts to a percussive and chaotic rendition of the robot army theme.  It is in this scene where the powerful fanfare appears as Sky Captain performs some heroics to dodge an onslaught of robots.  One more queue worth noting is “Return to Earth.”  Shearmur wrote action, adventure, transitional, romantic, playful, and tense musical themes throughout the film but the final queue reprises most of the major themes.  Just when you think you think the main fanfare couldn’t get more heroic, the sweeping rendition arrives at the closing minutes of the film.

It’s no secret the film would not have worked without Shearmur’s music.  The music accompanies each scene nicely and, in some cases, carries the scene forward where it otherwise would have been dull and boring.  Unlike many modern scores, the music played a key role in establishing the era of the film, describing the destructive behavior of the robot army, giving the sense of flight, and adding the heroic oomph Sky Captain needed.  Of course the score would not have accomplished all this without the passionate performance of the London Metropolitan Orchestra and voices.

This score truly stands out as one of the best scores of 2004 and one of the best adventure scores in recent memory.  Edward Shearmur gives hope to the film score fan that believes Yared’s rejection spelled the end for the “old school” symphonic scores.  Shearmur’s Sky Captain truly captures the feel of the classic scores and earns itself a place in film score history.